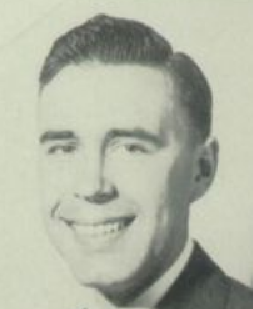 Roy Leenig was a star on the West New York Memorial High School basketball team that won the 1939 New Jersey State championship.  Leenig did not attend college, but but coached  St.Peter’s Prep to prominence in the early 1950s.  Leening guided St.Peter’s to  five straight New Jersey Parochial A Division championships from 1951 to 1955.   He was head basketball coach at  Holy  Cross College  from 1955 until 1961. In six years, he posted a 106-48 record. Leenig coached Tom Heinsohn who has been associated with the Boston Celtics of the National Basketball Association for six decades as a player, coach and broadcaster and is a member of the Basketball Hall of Fame. After the 1960-61 season, in which Holy Cross finished with a 22-5 record, Leenig , at age 41,  resigned as coach siting  “personal reasons” and never coached again at any level.