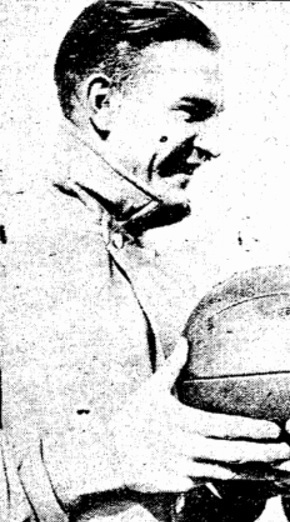 Rusty Saunders was the son of an early pro basketball player, Jack Saunders, who appeared briefly in the National Basketball League before the turn of the century. By the time he was 15 years old, the young Saunders was a strapping six-footer who weighed over 200 pounds and was prominent in the Trenton city basketball league that was dotted with tough ex- professional players. Saunders made his major league debut with his hometown Trenton club in 1924. The next year, he signed with Brooklyn entry in the new American Basketball League. Early in the season, he was traded to Washington. The 19-year-old Saunders was the surprise sensation of the 1925-26 ABL season. He led the league in points scored and then repeated the feat again in 1926-27. He was sold to Fort Wayne in the middle of 1927-28 season, were he starred for the next three and half years. The Hoosiers got to the ABL finals in 1928 and 1929, but were crushed both times by the New York Celtics. They made it to the finals once again in 1931, but lost to the Brooklyn Visitation. In the early 1930s, Saunders returned to his hometown for two seasons.  He led Trenton to the Eastern Basketball League title in 1932-33. Trenton moved into the reconstructed ABL for the 1933-34 season. Trenton won 14 of 15 games to capture the first half of the split season. Saunders led all scorers in the playoffs, but the Moose succumbed to the SPHAS in six games. Saunders remained in the ABL for three more seasons, before he signed with the barnstorming New York Celtics for three seasons in the late 1930’s. In 1940, Dutch Dehnert signed Saunders to National Basketball League contract with Detroit Eagles, but injuries and age had robbed him of his skills and he was released at mid-season. Saunders left behind a legacy of hard work and unbridled determination to win, and the memories of his contemporaries that rated him behind only Dehnert as a master of the pivot play.

Saunders also played professional baseball from 1927 through 1933. He appeared in five major league with the Philadelphia Athletics late in the 1927 season, but never returned to the big leagues.