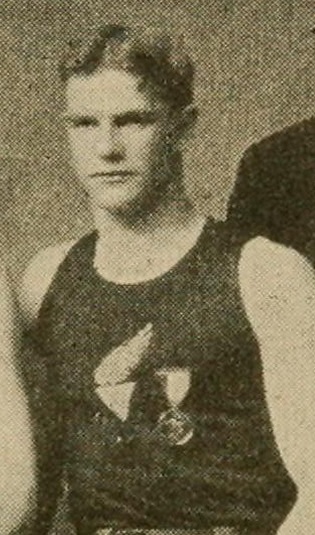 Sandy Shields was one of the biggest stars in professional basketball’s  formative years.  A strong, handsome  athlete, his graceful style on the court reflected his early training as gymnast. He also earned a reputation as one of the most aggressive players in the early years of the game. Shields was an integral part of the early success of the famed 23rd Street YMCA and the later professional version of the same team, the 23rd Street Wanderers. In 1900, Shields left the Wanders to take a position at the Homestead, Pennsylvania YMCA. He only stayed for one year, but his influence on the development of the game in the Pittsburgh area was substantial. Shields returned to New York and  played with the 23rd Street team  for another half-dozen seasons. In 1907, Shields was hired as player-coach of East Liverpool in the Central Basketball League, but resigned at mid-season after winning only three of twenty-eight games.  The next season, Shields received good notices as a referee in the Hudson River League. Shields was  the father of twenties and thirties tennis star Frank Shields and the great-grandfather of of actress Brooks Shields.