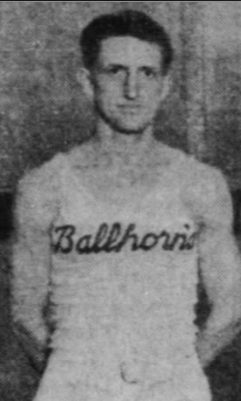 Sheboygan, Wisconsin, is a small town (population of 40,000 in the 1930′ and 1940’s)  50 miles north of Milwaukee.  Sheboygan was a hotbed  independent professional basketball throughout the 1920’s  and 1930’s.  Charles “Slim” Lonsdorf played organized basketball in Sheboygan from the mid-1920’s until the mid-1940’s.    Lonsdorf started out playing for the Kohler Company team where he was employed  Lonsdorff  followed up wwith stints on other local teams such as the Bullhorns, the Enzo-Jetsand  the Art Amigs.  In 1938, Sheboygan acquired a franchise  in the National basketball League. Lonsdorf appeared in 17 major league  games for  the Redskins before returning to independent ball.