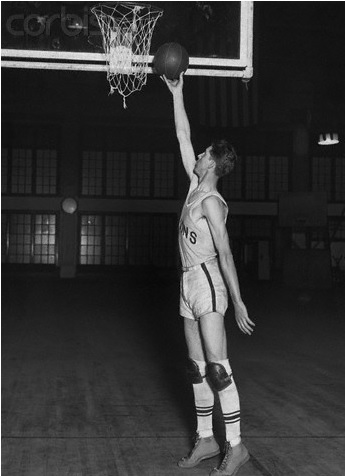 Milas “Slim” Shoun was a high school star in Mountain, City, Tennessee. He played basketball at Carson-Newman College in Konxville, Tennessee  from 1923 through 1927.  Shoun was often referred to as the first 7-footer (sometimes even 7’2″) in professional basketball , but he actually topped out at 6’11”. Despite his huge height advantage in an era when most players were a foot shorter, he was never a  a dominate player. Shoun was slow and possessed limited offensive skills,  but was valued for his ability to garner jump balls (after every basket in this era) and to capture rebounds. He played basketball for the Akron Firestone team for eleven years and remained with the company as an employee for 42 years.