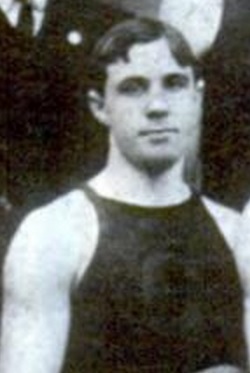 Steve White, a Philadelphia native, ranked as one the best set-shooters in the early years of professional basketball. In his first pro season, White finished second in scoring in the minor-league American Basketball League. His contract was purchased by Philadelphia of the National Basketball League where he quickly made his mark with 12 points a game, good for fourth-best in league scoring. White starred for the powerful Conshohocken team for four seasons during which they won two Philadelphia League titles. At at end of the 1906-07 Philadelphia League season, White  was lured to the the higher-paying Central Basketball League were he joined Greensburg team for the second half of the Central League  season. White led the CBL in scoring in for the 1907-08 and 1908-09 seasons. Despite his small stature, White was a feisty and  aggressive player. Fearless and combative, White received a great deal of  punishment from larger players. As a result, injuries nagged him throughout his career and by his last two seasons in the CBL he was crippled to the point that he managed to play in only a third of the games.