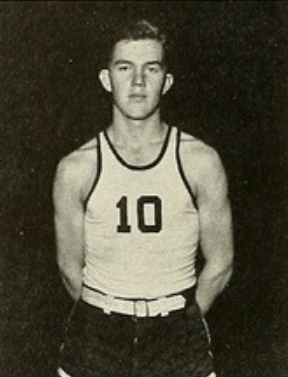 Thaddeus “Ted” Bokina a stared  at  the Massachusetts State College (later the  University of Massachusetts, Amherst) from  1939 through 1943.  His height,  6 feet, seven inches, got him nicknamed “The Giant” during an era when most players barely topped 6-feet. He was the leading scoring  on the team for three seasons. After earning a bachelor’s degree in 1943. he  got a job as an agricultural statistician and  began playing minor-league professional basketball with the  Boston Goodwins at $25 a game in the New England Basketball League. Traded mid-season to Fitchburg, Bokina averaged 13.1 points a game and led his new team to the NEBL Championship.  In  1946, he  signed with the professional Dow Athletic Club of Midland, Michigan, a powerful Midwest independent team sponsored by Dow Chemical company. At the end of the season, Bokina played well in the World Professional Tournament in Chicago. When the Dow A.C. signed to join the National Basketball League for the 1947-48 season, Bokina seemed on the verge of stardom. After the final exhibition game prior to the start of the season, Bokina came down with pleurisy and never played another game.