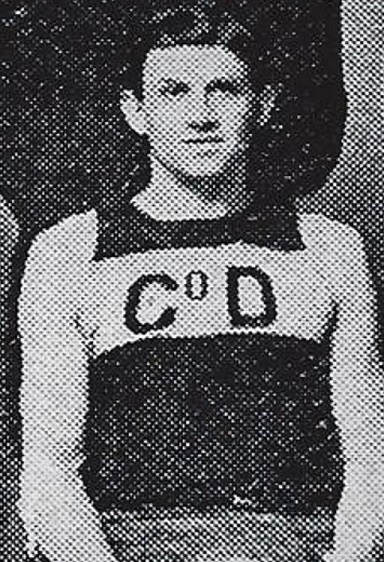 Toby Matthews learned the fundamentals of basketball playing with local teams in his native Catskill, NewYork . In 1902-03, Matthew’s was a key member of the Springfield, Massachusetts Central Basketball League championship team. The following season, when the league began importing Philadelphia stars such as Harry Hough and Eddie Ferat, many of the prominent 1902-03 players were relegated to minor roles. Matthews was one of the few holdovers to flourish in the more competitive environment. During the next few seasons, he blossomed into one of the top stars in professional basketball. He finished second in league scoring to Hough in 1903-04 and was the leading point scorer in the 1904-05 New England League. From 1906 to 1909, despite his status as one of basketball’s best performers, Matthews remained close to home rather than playing in the preeminent Central Basketball League. Mathews performed in the obscurity of upstate New York and in Vermont towns with strong independent teams such as the St.Johnsbury Co.D team. In 1909, Matthews returned to prominence when he signed with his hometown Catskill entry in the newly formed Hudson RiverLeague. He led the circuit in scoring by a wide margin. Matthews was a creative scorer who was a master of playing the ball off the net that surrounded courts of the era. During the course of next five seasons in the HRL and later the New York State League, Matthew’s consistently battled legendary Troy center Ed Wachter to a draw. The two friendly rivals engaged in some titanic struggles, but Matthews was always hampered by the weaker supporting cast and was inevitably on the losing end. After playing independent ball in 1914-15, Matthews returned to the NYSL the next season in top form until he was sidelined by a severe knee injury on New Year’s Day of 1916. While he never was the same player after the injury, Matthews played professionally for almost another decade, until he was 46-years- old, appearing with minor league teams and barnstorming throughout New England.