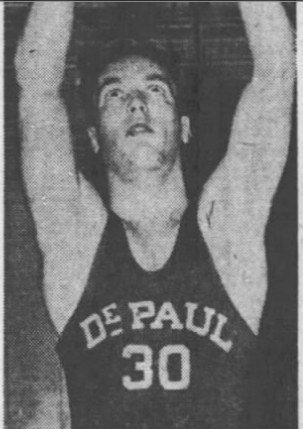 Tony Kelly was a star  athlete at Mt. Carmel High School in Chicago. Kelly was the best player on the 1937-38  Marquette University freshman basketball squad, but sat out the following year because of   bone operation on his foot and the following season played only 7 games because of continuing foot problems.  In 1940, Kelley  returned to Chicago and enrolled at DePaul University and played  AAU basketball with the Palmer Hotel team that won the Chicago city championship. Kelly was finally healthy enough to return full time  to the sport in the fall of 1941.  He enjoyed  two  standout seasons at DePaul and  was captain of the 1942-43 squad. After graduation from DePaul, Kelly played professional basketball for five years including three seasons for Sheboygan in the National Basketball League . During the 1946-47 season, Kelly played for the Baltimore Bullets who posted a 31-3 record in the American Basketball League.