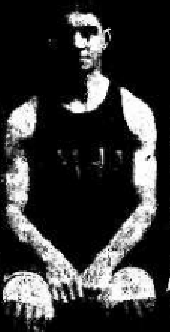 William “Toots” Kronick was the longtime star of the North Adams’  Y.M.H.A basketball team.  North Adams, a town of about 13,000 in Western Massachusetts, was one of the dozens of small New England towns  that supported a semi-professional basketball team during the 1920s. Ever Saturday night during the winter, fans would pack the Odd Fellows Hall in to see the local team in action against a squad from a nearby town.  On special occasions, when a famous touring team, such as the New York Celtics, was the attraction,  the games would played at at the  State Armory Court in Adams.  After returning from military service in 1919, Kronick appeared in three New York State League  games.