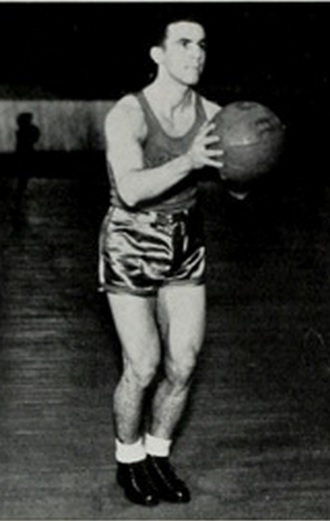 Warren Whitlinger was a  baseball and basketball star at Ohio State. In his senior year of basketball, Whitlinger led the Big Ten in scoring and earned All-Conference honors. Whitlinger’s had limited  success in the pro game. He was a starter  for the 1937-38 Akron Firestones who posted a 14-4 record, the best in the National Basketball League, but Whitlinger was not offered a contract for the following season.  In 1939, he was hired by Kimberly Clark Corporation in Neenah, Wisconsin,  where worked for for the next 35 years. He retired in 1975 as Director of Quality Assurance. Later in life he found success in another sport, tennis, not a player, but as a widely renowned coach. His son, John won 109 consecutive matches en route to singles state championships in each of his four years in high school. A two-time All-American at Stanford, John led his team to NCAA team championships in 1973 and 1974. Also in 1974, he captured both the NCAA singles and doubles titles himself, then played professionally for six years. before returning to Stanford as the men’s tennis coach. Warren’s  grandaughter, Teri, helped Stanford win four straight NCAA team championships.  Whitlinger remained active coaching tennis until just before his death in 2012, at the age of 98.