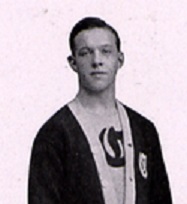 Walter “Wobby” Hammond was a three-year (191-1913} basketball letterman at Colgate University. After graduation, he coached the team for six seasons (1914-1919) compiling a 107-65 record. During the years he coached at Colgate, he also played professional basketball and baseball.  In both sports, he enjoyed his best seasons late in his career. He was the leading scorer for Amsterdam in the New York State League in both 1919-20 and 1920-21. In  baseball, he  hit over .300 during his  last five minor league seasons (1919-23) and was rewarded with brief appearances in the majors. In 1924, Hammond deserted organized baseball to play with the  “outlaw” Kenosha, Wisconsin team.  Hammond took a permanent position with the Simmons  Furniture Company of Kenosha, where he remained until his death in 1942.