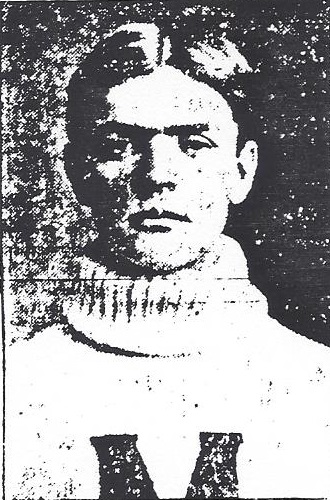 Flo Haggerty’s career spanned fifteen years from the turn of century to the  rumblings of World War I. Haggerty worked  hard at  developing  his skills as a player and enjoyed his greatest success when he was in his late twenties and early thirties. He spent his early years in pro basketball  on various teams in his home state, Massachusetts. In  1904-05,  he enjoyed a standout season with Haverhill in the New England Basketball League which attracted the attention of Lew Wachter. Over the next three seasons,  Haggerty played on powerful independent teams in Troy and Gloversville alongside Lew and Ed Wachter. In 1908, Haggerty jumped to the Central Basketball League where he played for three seasons with Johnstown. Haggerty spent the final years of his career in the New York State League. He reunited with the Wachter brothers in Troy for the 1913-14 season and  helped produce an excellent 47-18 record. Haggerty retired from the game in 1915 just as his younger brother, George “Horse” Haggerty was emerging as one of the most famous stars in professional basketball.